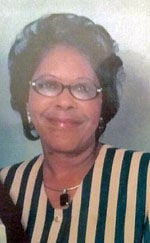 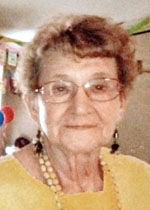 She was a lifelong resident of Crossett and a member of New Bethel Missionary Baptist Church where she served as chairman of the kitchen ministry.

She was preceded in death by her husband of 28 years, Amos Miller; her parents, Eugene and Carrie B. Newton; one sister, Patricia Ann Newton; and one brother, Raymond Newton.

Frances B. Wilson, 87, of Portland, died Thursday, Nov. 15, 2018. She was a native and lifelong resident of Portland, worked for Farm Equipment Company and Gus Pugh & Sons Gin for 25 years, and was a member of Portland United Methodist Church.

She was preceded in death by one granddaughter, Amanda Maxwell; her parents, Dave and Lydia Jane Estes Hackett; two half-sisters, Estelle Crawford and Mary Breedlove; and one half-brother, Cecil Peoples.

She is survived by her husband of 70 years, Bill Wilson of Portland; two children, Angie Maxwell of Hot Springs and Perry Wilson and wife, Cecilia, of Hollis; one brother, Henry Dave Hackett of Dermott; three sisters, Bea Mazzanti of Lake Village, Vaughter Glover of McGehee and Sylvia Pierce of Hamburg; two granddaughters; and two great-granddaughters.