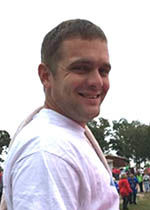 He was preceded in death by his father, Will B. Forrest; his mother, Annie Lou Watt Rushing; and two sisters, Shirley Forrest and Judy Dampier.

His survivors include one daughter, Anne Crymes (Pete) of Bastrop; one son, Brad Forrest of Crossett; one grandson, Kye Crymes of Bastrop; and three sisters, Pat Langston (Ken) of Bastrop, Aliene Ray (Mike) of Oak Grove, La., and Ruth Jenkins of Bastrop; one brother, Tim Rushing of Mer Rouge, La.

A Celebration of Life Graveside Service will be held on Saturday, June 6, at 10:00 a.m., at Crossroads Cemetery in Crossett with Bro. Mike Ray, officiating.

Chad Hampton, 35, of Crossett, died Monday, May 25, 2020 in Little Rock. He was a native of El Dorado and a resident of Crossett for most of his life. He served in the Louisiana National Guard and worked as a forklift operator.

He was preceded in death by his grandfathers, Jerry Williamson and John aHampton.

He is survived by two daughters, Karlie Grace Hampton and Maggie Hampton of Hamburg; his father, Robert Hampton of Crossett; his mother and step-father, Anne Williamson Golden and Chris Golden of Mer Rouge, La.; one step-brother, Patrick Golden of Bastrop, La.; one step-sister, Heather Nordan of Monroe, La.; and his grandmothers, Gussie Hampton of Hot Springs and Margaret Robinson and husband, Ray, of Bastrop.

A private graveside service will be held at a later date in Bonne Idee Cemetery in Mer Rouge. Funeral arrangements were under the direction of Jones-Hartshorn Funeral Home.