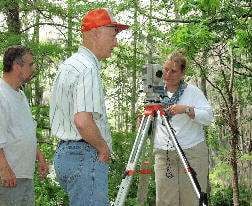 From left, Dr. Joe Saunders and Dr. Marvin Jeter watch the creation of a precision survey of the Wilmot mound. 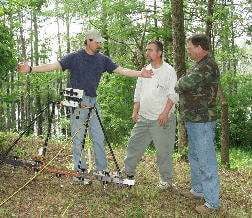 Dr. Lockhart makes a point to Dr. Joe Saunders of the University of Louisiana-Monroe and volunteer and retired physician Dr. John Norris of Monroe.

From left, Dr. Joe Saunders and Dr. Marvin Jeter watch the creation of a precision survey of the Wilmot mound.

Dr. Lockhart makes a point to Dr. Joe Saunders of the University of Louisiana-Monroe and volunteer and retired physician Dr. John Norris of Monroe.

In October, 1997, Dr. Marvin Jeter of the Arkansas Archeological Survey along with Ed and Patsy White and Margie Pounds of Hamburg and other volunteers worked for three weeks to excavate test trenches in an Indian mound on the north banks of Lake Enterprise in Wilmot. At that time, based on traditional archeological techniques, Dr. Jeter concluded that the mound may be the oldest in Arkansas.

Almost five years later, in late April, 2002, researchers again studied the mound, this time using the latest types of electronic equipment. The results of the tests, once all the data is compiled, can help to determine where future excavations should be located and will also help in providing a more reliable date for the mound..

One such test was of magnetic conductivity and susceptibility. That test helps to locate areas in the mound which may have been burned. Fire pits and hearths are the most obvious examples of that type of change in the soil's magnet properties.

A second type of test involved measuring electrical resistance. By injecting a small current of electricity in the ground, the researchers were able to show differences in the amount of soil compaction and differences in the types of soil, based on the way they hold moisture. The test machinery consists of six probes which measure the resistance at levels down to 1.5 meters below the surface. The electrical resistance test is especially useful in determining the edges of mounds, Dr. Lockhart said. The data obtained during the test can be downloaded to prepare a grid showing an image of the mound.

A magnetometer, called a flux grate gradiometer, performed passive tests on the mound. The device measures the natural alignment of the earth's magnetic field. That field changes over time, and the magnetic alignment also changes in areas which have been disturbed as well as in areas in which there have been fires hot enough to change the alignment.

Dr. Lockhart ran short of time, and so postponed a another type of test, ground penetrating radar, until he can schedule another visit to the mound. That test sends a signal into the ground, and by measuring the time that it takes for the signal to return, can determine the depth of an object. The ground penetrating radar is useful in identifying items such as hearths and post molds (where wooden posts have decayed).

The researchers also completed a precision survey of the mound which, with the electronic data downloaded and plotted, will allow them to pinpoint areas for further study and excavation. The data compiled from the various types of analyses will be combined to show the researchers what the soil is like underneath the surface. Dr. Jeter said that possibly in the fall, the data obtained from the electronic tests will be used for "ground truthing" in which researchers will dig trenches to confirm the test results.

Jeter, the Monticello Survey Archeologist, said that tests will show what happened to the various layers of the mound through time. He noted that the 1997 excavation determined that the mound was built to a certain point, and then after it had been used for some time, the Native Americans added additional dirt on top of the existing mound to increase its height.

The Wilmot mound is important because it dates from the Archaic period and so is very unusual in Arkansas. Also, the mound appears closely linked to an archaic civilization based about 35 miles south, the Poverty Point Culture.

Dr. Jeter said that several things to link the mound with the Poverty Point Culture in Louisiana. Most obvious are the Poverty Point Objects found in the 1997 survey (see related story at ashleycountyledger.com).

A second parallel is the type of land form. The Poverty Point Culture in Louisiana, which dates to about 1500 B.C., built near Bayou Bartholomew, but not on its banks. The same is true of the Wilmot mound, which is located near the bayou, but several hundred yards away from the stream. Based on his studies, Dr. Jeter said that he believes that the Wilmot mound dates from the 1000 to 1500 B. C. era and is possibly even older.

In addition, Dr. Jeter noted, University of Louisiana-Monroe archeologist and soil expert Dr. Joe Saunders has identified the soil as being about 4,000 years old, which is in keeping with the Poverty Point Culture.

Also, the researchers have found the right kind of artifacts at the site. Two to three feet below the surface, below disturbances in historic times, the researchers found only the Poverty Point Objects and a very few stone flakes. The stone flakes indicate that the builders or users of the Wilmot mound, like those at Poverty Point, imported stone from far away. Stone flakes found near the mound contain samples of Dover Chert from Tennessee, Fort Payne Chert from Alabama, Harrison County Flint from the Ohio River Valley, novaculite from the Hot Springs area and flint sherds from the Missouri and Arkansas Ozarks.

Another type of evidence is biological. After the 1997 dig, Dr. Jeter took samples from two hearth areas, one below the mound and one about two feet higher. He used floatation techniques no the samples and was able to isolate small seeds which an expert at Ohio State University identified. The seeds were from goosefoot (lamb's quarter), cane, May grass, polk, and purslane– all wild plants with no signs of seeds from domesticated plants. That is also in keeping with the Poverty Point Culture. The tests did not reveal any corn, which the Native Americans began cultivating later in the prehistoric period.

Some of those seeds will be radio carbon or Carbon 14 dated later this year. If the tests of the seeds show that they are over 3,000 years old, then the mound will certainly be the oldest in Arkansas. Dr. Jeter noted that the oldest identified mound in Arkansas is near Helena and dates from about 100 B. C. The Wilmot mount may be over 1,000 years older.

Other mounds such as the Henderson Mound across the bayou, the Boydell Mound and others along Bayou Bartholomew are much later in origin, dating from about 1,000 to 1,200 A. D. Those mounds contain broken pottery pieces while the Wilmot mound predated the Indians' use of pottery, and so only a very few pieces of pottery were found in the top areas at Wilmot– with those pieces attributed to much later use of the mound.

Dr. Jeter noted that outside the mound area, samples did not reveal any Poverty Point Objects.

Dr. Lockhart noted that after spending three days in the field at Wilmot, it will take about the same amount of time to correlate and analyze the data. Most of the results will be in a graphic format, with shades of gray on a printout indicating disturbances of the soil or other underground items. In addition to the images, a numeric analysis can be used to identify an exact spot on the mound for future study or excavations.

Once the analysis is completed, he will prepare a report, and he and Dr. Jeter will decide where future studies should concentrate. The statistical and numeric analysis of the mound will make any future work much easier and faster by identifying areas for study. In the 1997 study, it took three weeks to excavate only one plot of about 300 contained in the 20 meter by 20 meter square on which the mound sits.

The information gathered at Wilmot will also be of use elsewhere. Dr. Lockhart noted that he had never worked on a site as old as the Wilmot mound, but the images and other data will be added to a library of images which can be used to help in studies of other areas.

Dr. Jeter's studies indicate that the Native Americans constructed the mound by carrying baskets of dirt and broadcasting them over the site rather than simply dumping one on top of another. He said that the mound, which was build in at least two phases, was at one time over six feet high, but the top has eroded quite a bit over the centuries.

The next phase in the work is to compile and analyze the data from the electronic tests. That data will help to determine where the next work should be done as well as helping to determine the age of the mound. Since the researchers believe the mound has been there over 3,000 years, that next phase of the work will not require any immediate action.