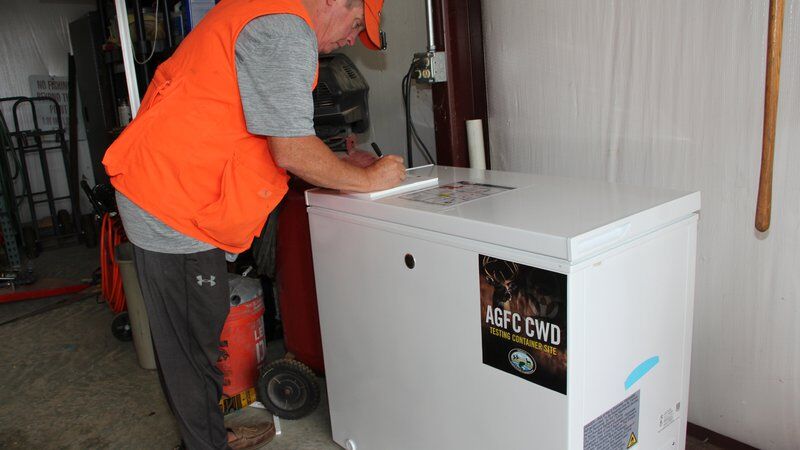 Arkansas Game and Fish Commission has arranged freezers at “self-serve” drop-off locations throughout the state where hunters can leave samples to be tested for chronic wasting disease. AGFC will use the results to help track and hopefully limit the spread of the disease. Hunters are being reminded not to move intact deer carcasses harvested inside the CWD Management Zone outside of that zone, even for testing purposes. 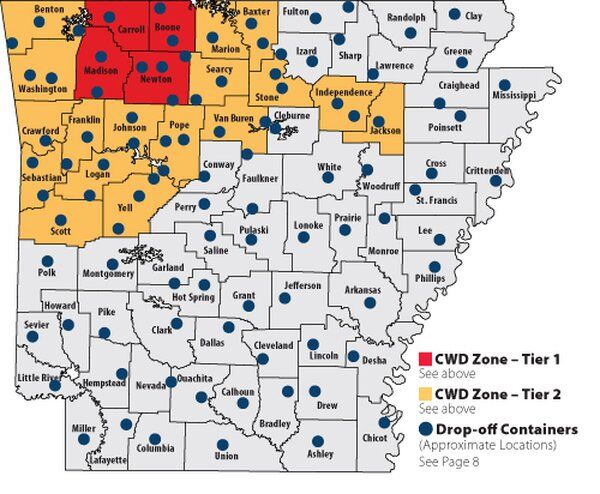 With more than 100 locations throughout the state Arkansas Game and Fish Commission offers at least one testing site per Arkansas county. Counties with known disease have multiple sites.

Hunters can help the Arkansas Game and Fish Commission by having this year’s harvested deer tested for chronic wasting disease at one of more than 100 free testing locations throughout The Natural State this season.

“This is not a food safety test, and there’s no confirmed evidence of a human ever getting CWD from eating venison, but we still want to offer our hunters this free test to keep them enjoying the sport of deer hunting,” said A.J. Riggs, wildlife health biologist in the AGFC’s Research, Evaluation and Compliance Division. “The Centers for Disease Control and Prevention (www.cdc.gov/prions/cwd/index.html) strongly recommend all hunters who are hunting in areas where CWD is known to be present have their deer tested and to not consume any animal known to be sick of any disease. Our testing sites give hunters the ability to make that decision.”

This year the AGFC will have 100 CWD drop-off containers placed throughout the state to take samples from any hunter who wants to submit a sample. Riggs says the AGFC has worked hard to supply at least one test site in every county, with counties in the known CWD Management Zone having multiple options. Visit www.agfc.com/cwd for testing locations.

“We want to help hunters test their harvested deer, and we want them to help us collect this valuable data,” Riggs said. “We have focused efforts around the CWD Management Zone, but with the new cases developing in some of our neighboring states, it’s important to keep our guard up in each county of the state.”

With Jackson and Independence counties being added to the CWD Management Zone this year, Riggs says they definitely would like to see more voluntary samples coming from that area to gauge disease prevalence and spatial distribution in those counties.

More than 100 locations are available throughout the state. “We’ve learned that you’re never lucky enough to get the first deer in the area with CWD, and that others likely exist,” Riggs said. “But we need hunters’ help in collecting the data to expand our knowledge of this disease.”

To submit a test at one of the containers, a hunter simply removes the deer’s head with at least four inches of neck still attached at its base, removes any antlers, places the head in a bag that’s provided at the freezer and places it inside with contact information. The stub from their contact information will guide them to find their test results.

“If we receive a positive result, AGFC staff will contact the hunter directly by the phone number provided with the sample,” Riggs said. “We will then make arrangements with the hunter to pick up any meat they no longer want and can provide an additional deer tag to harvest a doe to make up for the lost meat.”

See RuPaul and Cory Booker react to finding out they're cousins

Hear from voters on what key issues are influencing their decision

Riggs says test results are usually available within 2-3 weeks. The AGFC has partnered with the Arkansas Department of Agriculture Veterinary Diagnostic Lab in Little Rock to help complete the testing in a timely manner.

“Individual result times may speed up a little, depending on when the sample is placed and what day our staff is able to get to a container site for pick up,” Riggs said. “Samples then have to be thawed and collected before sending to the diagnostic lab, so hunters still should plan to store the animal for a couple of weeks before they get their results.”

In addition to “self-serve” drop-off locations, the AGFC has a network of taxidermists who will collect and submit CWD samples for free. While most of the animals they see are mature bucks, many will pull a sample from deer they are not mounting for hunters who want the help.

“We have a lot of the state’s taxidermists onboard with the program, but if a person’s favorite taxidermist doesn’t participate, they can still bring the animal to an AGFC regional office and have a sample collected after their taxidermist removes the cape.”

Riggs notes that hunters should remember not to move intact deer carcasses harvested inside the CWD Management Zone outside of that zone, even for testing purposes.

“We have many testing options within Arkansas’s CWD Management Zone, so it should not be an issue to find one,” Riggs said. “It’s all coordinated online after that, so they don’t have to feel like they should use one close to home. Whichever site is the most convenient and prevents them from crossing out of the CWD Management Zone will work.”

Deboned meat can be taken outside of the zone, as well as taxidermied heads, cleaned skull plates, antlers and capes.

“It just takes a little extra effort to help us slow the spread of this disease in Arkansas.”

Visit www.agfc.com/cwd to find a free testing location and learn more about CWD in Arkansas.