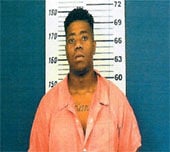 Ashley County Sheriff Tommy Sturgeon said he has made three arrests connected to the death of 17-year-old Josh Couser whose body was found on Ashley 16 Thursday morning.

Sturgeon said on Friday that adults Daylon Manning and Brandon Fields had been arrested along with a 16-year-old minor whose name he did not release.

Documents from the ASCO report that the 16 year old was the only one charged with murder. Fields and Manning were both charged with hindering apprehension and tampering with evidence, which Sturgeon said are both felony charges.

Sturgeon did confirm that the 16-year-old was the same suspect who allegedly robbed the service station in North Crossett known as E-Z Mart just weeks before.

Sturgeon said the matter is still under investigation but that the three arrested were to go before Judge Bynum Gibson in Lake Village on Tuesday morning.

“We are still working to get to the bottom of it,” Sturgeon said.

The victim was located on the roadway, which — being unpaved — was wet and muddy Thursday morning. He had multiple apparent gunshot wounds.

This Spanish town is taking isolation to another level

“Right now, I don’t have any reason to believe otherwise, but there is a whole lot that we just don’t know right now,” Sturgeon said.

While the victim appeared to have gunshot wounds, Sturgeon said he couldn’t say much more than that until autopsy results were in.

Sturgeon did say that he had impounded the vehicle which he believes was used to commit the crime.

He did not release an official make and model, but said the vehicle was an SUV.

Sturgeon said his office would release more information as soon as it could, but with an investigation pending that was all he was willing to share publicly at this time.

“We still have a lot of ground to cover with this investigation, but we hope to get to the bottom of it as quickly as we can,” he said.